Well here’s the first BIG news from yesterday’s global manufacting PMI reports – Spain’s manufacturing contraction accelerated in September. Of course, how could it be otherwise. But I do wish all those people who are still in denial on what is now an all too evident reality would finally come out of the woodwork and […]

Spain’s current account deficit fell to 2.064 billion euros in July from 7.752 billion euros a year earlier as imports tumbled, according to the latest Bank of Spain data. This is a very sharp and dramatic fall, and my guess is that at this rate the gap will close in six months or so, which […]

How Will The ECB Ever Manage To Stop Funding Spanish Government Debt?

The looming problem of what will happen as and when some of the other Eurozone economies eventually start to recover while the Spanish one languishes in decline is finally starting to make the columns of the global financial press. Yesterday Thomas Catan had an article in the Wall Street Journal entitled Spain’s Struggles Illustrate Pitfalls of Europe’s Common Currency while Emma Ross-Thomas and Gabi Thesing also had a similar sort of piece in Bloomberg, under the heading Europe’s Two-Speed Economy Complicates ECB Rate Plans.

So the difficulty Spain could represent for the rest of the Eurozone is now it seems becoming the “Topic du Jour”.

Even as France and Germany begin to show signs of economic recovery, weaker members of the European common-currency union remain mired in recession. Without painful overhauls, euro-zone countries such as Spain, Italy, Greece and Portugal seem set for years of meager growth, making their debts harder to pay. That raises the question: Could the divergent economic fortunes of euro-zone countries pose a problem for the currency union itself?

Or, as the Bloomberg columnists say:

Europe’s economies are rebounding at different speeds, complicating the European Central Bank’s efforts to put the region back on a more stable footing.

Even as the global economy recovers and Germany and France return to growth, the European Commission yesterday cut its forecasts for Spain and Italy. Deutsche Bank AG says some of the economies that were once motors of growth and job creation across the 16-nation bloc may stay mired in recession next year.

So what is the background here? Let’s look at what has happened in Spain. The Spanish property bubble started to slowly puncture throughout 2006 (well before the outbreak of the Sub Prime crisis) as the ECB steadily started to tight monetary policy and raised interest rates – the biggest weakness, and greatest vulnerability in the Spanish domestic economy is the way Spanish mortgages are overwhelmingly (85% plus) of the variable interest rate variety. That makes Spanish consumption exceptionally dependent on ECB interest rates. Thus, when these are lowered, as has happened over the last nine months, the relief is virtually instantaneous (as can be seen in the recent surge in the consumer confidence index) but when they are raised the squeeze on spending power is acute.

The decline in construction was followed by a decline in industrial output and job creation, which both peaked in June/July 2007 – with production having fallen by 33.45% from the peak by last July. That is industrial output has now been falling for over two years. Then, as the economy slowed domestic demand started to fall, and retail sales are now down a little over 10% from their November 2007 peak. So, as we can see, the whole economy is steadily sliding down, as first the builders, then households, and then finally companies steadily reduce their spending, and the drift is relentless. 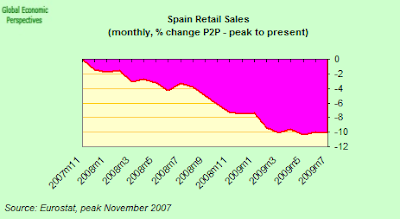 Is Economic Boom around the Corner?

Back in February, I asked you if we were experiencing a recession or depression.  A plurality said it was a depression with a small ’d.’ I agreed and went on to explain why. Since then, things have changed and we seem to be on the verge of what I call a technical recovery (or a […]

According to an article which appeared in the Spanish newspaper Expansion this morning, one in five Spanish mortgages is now considered as being high risk and liable to become “non performing”. The mortgages at greatest risk are naturally those contracted after 2005 where the loan to valuation was over 80% of the total. In 2006 […]