The US reported a June trade deficit that was smaller than expected.  The $41.5 bln shortfall was the smallest since January.

Imports were off 1.2%, which is a bit unusual as the rebound in the US economy is traditionally associated with more imports. The may be some seasonal distortion.  It is the largest drop in imports since June 2013.
A full two-thirds of the decline in imports can be traced to two goods–autos/parts and cell phones.  Excluding oil, the trade deficit fell to $26.9 bln from $29.5 in May.  Petroleum imports fell to new three-year lows.
Exports edged up ever so slightly to almost $196 bln to a new record. Commercial aircraft, pharmaceuticals and chemical exports were strong.
The US, Canada, the EU and others have placed sanctions on Russia.  Yet Russia is more integrated into the world economy than the Soviet Union.  The commercial sanctions hurt both buyers and sellers.  The impact appears to gradually becoming evident.  German factory orders fell an unexpectedly sharp 3.2% in June and the Economics Ministry warned that the sanctions dampen activity. 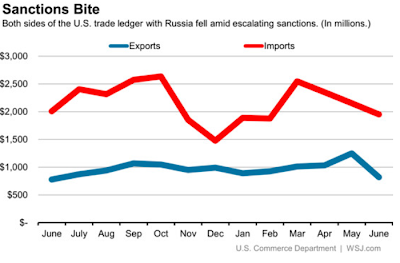 This Great Graphic, which draws from the official US government data, was posted in theWall Street Journal by Ian Talley.  It depicts the change in US imports and exports from Russia over the past year.
Exports to Russia fell 34% in June from May. They now stand at the lowest since last June.  Imports fell 10% to extend the declining streak a third month.  Ironically, the decline in imports and exports resulted in the US recording a larger trade deficit with Russia ($1.133 bln vs $904 bln in May).  That said, the Q2 bilateral deficit was about $121 mln smaller than the Q1 deficit and a little more than 25% smaller than the Q2 13 bilateral deficit.
We have been generally sympathetic toward the sanction response, and recognize it to be among the strongest responses to Russian actions since the Berlin Blockade in the 1940s.  However, we have also recognized a sanction regime would not get Russia to withdraw from Crimea, and that the impact would be seen only over time.  Therefore, we are hesitant to read too much into the recent trade figures.
In addition, we note that the bilateral trade figures move around and may not be seasonally adjusted. Imports from Russia fell in Q4 2013 by nearly as much as they have fallen in Q2 2014.  We similarly caution against over interpreting one month decline in exports to Russia, which had been rising in April and May.  Still, over time, this is the direction that both time series should move, especially given Russia’s counter-sanctions.