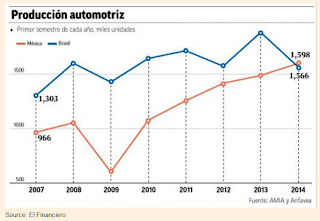 Many Brazilians are loath to see their rival Argentina win the World Cup at the Maracana on Sunday. However, as this Great Graphic from theFinancial Times beyondbrics blog, shows, Brazil is falling behind another regional rival, Mexico, in auto output.
Mexico’s auto output in H1 was 1.60 mln units, while Brazil produced 1.57 mln vehicles.    Although Mexico’s lead is quite small, it is several years in the making.  Although the Mexican economy has disappointed, its auto output increased an impressive 7.4% in H1 14, according to Mexico’s Auto Industry Association.  In contrast, Brazilian auto output fell nearly 17% from H1 13, according to the Brazil’s auto producers association.
This partly is a function of a new division of labor we noted before.   Auto production is increasingly integrated in the North American continent.  Auto production has moved south.  South from Detriot and south from the US.  An estimated 40% of auto jobs in North America are in Mexico.  Many foreign car makers, Asian as well and European, have built or expanded capacity in Mexico.
Mexico is set to become the largest source of US auto imports by the end of next year, according to industry estimates. Mexico exports 80% of its auto output and its auto exports are at record levels (1.3 mln vehicles).  Brazil’s output is more for domestic consumption.  It exported a little less than 170k cars in H1,  which represents more than a 35% decline from H1 13.  In 2013 Brazilian auto sales fell for the first time in a decade.