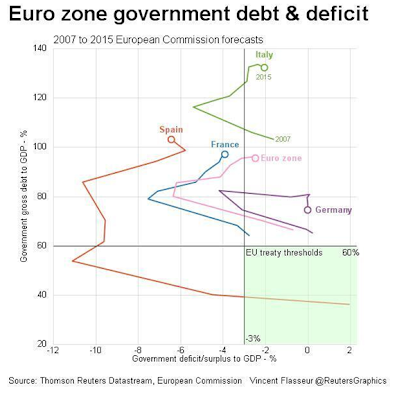 This Great Graphic was tweeted by Fabrizio Goria who got it from Vincent Flasseur at Thomson Reuters.    It depicts the gross government debt and deficits (as a percentage of GDP) for a select group of euro area countries between 2007 to 2015 using EC forecasts.

It shows that Italy, Spain, France,  Germany and the euro zone as a while have great gross debt than before the crisis.   The deficits in 2015 are projected to be larger than in 2007, though Germany is close, with a balanced budget.

That said, the deficit have all been reduced from the crisis peak.  Yet, the deficits in France and Spain are anticipated to still be larger than the EU agreements of 3% next year.  The debt to GDP ratios remain well above the 60% threshold and outside of Germany, there does not appear to be progress yet in reducing debt burden.

One Response to "Great Graphic: Eurozone Debt and Deficits"