Given that the debate over US fiscal policy has resulted in a government shut down in more than half the past 30 years might mean that, as distasteful as it is, it is part of the normal process. Such an outcome seems impossible in a parliamentary system, in which the executive (and cabinet) comes out of the legislative branch.

One of the implications, however, for such a track record, is that there is sufficient data to see how the US equity market performs. This Great Graphic was posted on Business Insider, which got it from a Raymond James strategist, who got it from SentimenTrader. 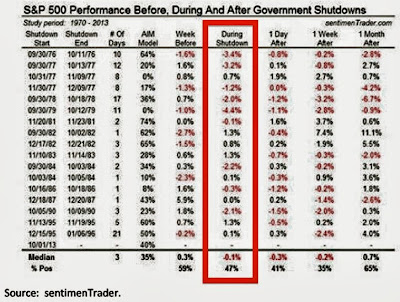 It provides useful data on dates of the shutdown, how long it lasted, and how the S&P 500 did the week before, during and a few time periods afterward.  However, we think it is difficult to find a meaningful pattern.  For example, the conclusion that the S&P has been positive 47% of the time, includes three times in which there was a net change of 0.1% of less.  In addition, given the wide dispersion of results, the median is not a very useful statistic.
Perhaps the lack of a pattern itself is useful information.  If true, it suggests that investors should look past the near-term vagaries and remain focused on their knitting, which for most of us, means buying good companies below fair value.