Providing the ugly fundamental truth in the good ole days used serve as cold water for a rally… now – not so much: after all who cares for logic? Dave chimes in.

The market has still not reflected reality This view that we are coming off a bear market that was overdone seems off base as well, in our view: Yes, the 57% peak-to-trough slide in the S&P 500 was larger than any other decline since the 1937-42 bear. But then again, reported earnings plunged 82% so perhaps it can be argued that to this day, the market has still not reflected that reality. As for the duration, this bear market lasted 17 months (if in fact, March 9th was the bottom) versus an average of 20 (not to mention the 62 months from 1937-42, and the 37-month bear that began in 1946).

As an aside, look at the below chart. As of March, the trailing P/E on reported earnings was 100x, more than twice as expensive as the market was at the peak of the tech bubble, and the most pricey it has ever been! 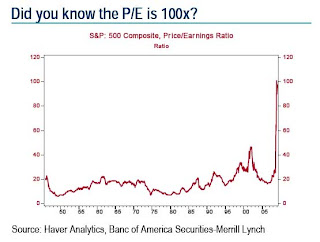 Is the economy really turning around? It’s amazing how everyone latches on to any positive piece of data to claim that the recession is over and a new bull market about to begin. Go back to prior recessions, and indeed you will see that ISM, new home sales and durable goods shipments have risen 38% of the time; retail sales have actually risen half the time and new home sales 30% of the time. In our view, it just goes to show that (i) it is what happens the rest of the time that matters more, and (ii) a reminder that nothing moves in a straight line.

FOMC lowers expectations, minutes show FOMC members noted that, relative to their expectations, conditions had deteriorated since their last meeting in January. Of “particular note” was the “sharp fall in foreign economic activity.” It was not just FOMC members whose views had shifted to the downside but also those of the Fed staff. The Fed staff now expect growth to “flatten out gradually over the second half of this year and then to expand slowly next year” as credit conditions improve. They noted that this suggests that the unemployment rate will rise “more steeply into early next year before flattening out at a high level.” This new outlook helps to explain the rather dramatic increase in the size of the Fed’s balance sheet which was announced at this meeting.

The minutes show a mix of views, although it seemed generally agreed that “the uptick in housing starts in February” was not “the beginning of a new trend.” Regarding the consumer outlook, the views were more mixed. The minutes show “participants noted some tentative signs of stabilization in consumer spending.” However, other participants “suggested that strains on household balance sheets from falling equity and house prices, reduced credit availability, and the fear of unemployment” could “damp consumption growth.”

The trade deficit shrank to $26.0B in February from $36.2B in January on a collapse in imports, as the deep US recession continues, combined with a slight upturn in exports for the first time since last July. The numbers will likely take our GDP forecast for 1Q up by about 1 to 2 percentage points, but the tracking will remain deep in recession territory. In a separate report, import prices rose 0.5% m/m in March, the first gain since July, on higher petroleum prices. Ex petroleum, prices fell 0.7% m/m and were at -3.7% y/y – highlighting ongoing disinflation trends at work in the US economy.

Imports were crushed again, seeing a 5.1% m/m decline in February, and are running at -51.6% annualized on a 3-month trailing basis. Almost no category was unscathed in the report. Capex goods imports dropped another 6.0%, similar to January and suggest an even weaker 1Q capex profile than the 29.0% q/q annualized decline in our GDP add-up. Industrial supplies fell 9.3% m/m on falling commodity prices and lower volumes. Consumer goods were off 3.9% m/m and this was flattered by a 21.4% gain in pharma products, so the numbers that reflect consumer demand were weaker still. On the export side, activity was up 1.6% m/m on stronger tech exports as well as consumer goods and autos (the latter was the result of resumed production after the December/January shutdowns). The real trade deficit (using the BLS prices to deflate) narrowed to $41.8B in February from 52.3B in January.

Consumer credit contraction Well, if public policy is aimed at resurrecting a new credit-creation cycle, then we suppose the grade it deserves is a big fat F. Then again, to think that we can actually embark on a whole new credit cycle at a time when the outstanding volume of private sector debt is equivalent to a record 180% of national income, well above the 120% long-run norm, is perhaps just a little pie-in-the-sky. Households, in particular, are choking on an amount of debt and debt-service relative to net worth and cash flows that is practically without precedent, so why would they line up for more even with the government doing all it can to entice them to borrow and spend? Indeed, consumer credit fell $7.5 billion or at a 3.5% annual rate, the fourth decline in the past five months. Over this time, outstanding consumer credit has contracted at a record $45 billion annual rate (-1.7% SAAR).

No floor in labor market yet

Initial claims for unemployment benefits fell by 20K to 654K in the first week of April. This was below both consensus and BAS-ML estimates. The four-week average remained essentially unchanged at 657K, though still nearing in on the 1982 record high of 674K when the unemployment rate was 10.8%. We’ve yet to see any stabilization in the pace of layoffs as the labor market has yet to find a bottom. Our early tracking for April payrolls is for a 700K monthly decline following the 663K drop in March.

Continuing claims jumped 95K to over 5.8M for the 10th consecutive week of record highs. These numbers are clearly signaling a more rapid deterioration in the labor markets and speak to the longer duration of unemployment that more and more workers are grappling with. After exhausting regular benefits, over 1.5M people rolled into the extended Federal program to receive additional support for several more weeks. With more companies cutting jobs and fewer hiring, we believe the unemployment rate will reach 10% this summer.

Inventories down but not enough Wholesale inventories fell by 1.5% m/m in February there is much more de-stocking needed, in our view, to realign inventories with sales. The inventory-to-sales ratio (I/S) only edged down to 1.31 months from a cycle high of 1.34 months (the ratio needs to decline to about 1.12 to 1.14 months), which likely means continued production cuts and job layoffs in the coming months.

The durable goods sector saw the most improvement in the inventory-to-sales ratio (1.82 months in February versus 1.90 in January), where the auto, furniture, machinery and tech sectors managed to make at least some dent in their excessive stockpiles. However, there is no industry that has managed to completely realign its inventories yet. The nondurable goods sector inventories held steady at 0.89 months, just off the cycle high of 0.9 months. The build-up in this sector has not been as excessive as in the durables sector since nondurable inventories are easier to manage through business cycles. Still, the chemical and petroleum industries have not fared as well in inventory management: the I/S ratios continued to press to new cycle highs in February.

Led by a 10.5% increase in petroleum import prices, the price of all imports posted a 0.5% gain in March. The median of analysts’ expectations was for a steeper 0.9% increase. This was the first increase in import prices in eight months. We expect the ongoing slowdown in global business activity will, however, put downward pressure on import prices.

The nonmanufacturing recession continued in March as the ISM nonmanufacturing index recorded its 6th consecutive reading below 50. The ISM nonmanufacturing composite index fell from 41.6 in February to 40.8 in March. The median of analysts’ projections was 42.0. Only one of the 18 industries in the survey, real estate, rental and leasing, reported growth in March. In a special question, only eight of the 18 industries expected to derive some benefit from the stimulus package. Last week’s report indicates that a revival in economic activity in the service sector is not imminent.

The new orders index, which was at 40.7 in February, posted a reading of 38.8 in March. The employment index fell five percentage points to 32.3 in March. Only 7 percent of survey respondents reported higher employment in March (down from February’s 10 percent share) while 43 percent reported lower employment in March (up from February’s 38 percent share). The contraction in new orders and employment suggests that nonmanufacturing activity will remain weak in the months ahead. The prices index fell from February’s reading of 48.1 to 39.1 in March. Foods, energy and energy-derivative products and metals were the commodities that were reported down in price. So much for the big inflation view coming to fruition.

Helped by low interest rates, mortgage applications rose 4.7% for the week ended April 3rd. This is the fifth consecutive increase in mortgage applications (92.5% gain) and suggests that the demand for housing is strengthening. One factor helping the housing sector is low mortgage rates. While the 30-year fixed rate mortgage rose 12bps to 4.73%, this is the fifth consecutive week in which the rate was below 5.0%. We expect mortgage rates to remain low through the end of the year.

As always with gratitude to Dave Rosenberg for his crystal clear thoughts.