The Incredibly Shrinking Market Liquidity, Or The Upcoming Black Swan Of Black Swans

“Anyone who is doing anything sensible right now is either losing money or is out of the market entirely.” These are the words of a quant trader, who is seeing something scary in the capital markets. Scary enough to merit a warning that we could be on the verge of another October 87, August 2007, or January 2008.

Let’s back up. I recently posted a chart which tracks equity market neutral strategies: in essence a cross section of quant funds for which there is public performance tracking. The chart is presented below.

There is not much publicly available data to follow what goes on in the mystery shrouded quant world. However, another chart that tracks the market neutral performance is the HSKAX, or the Highbridge Statistical Market Neutral Fund, presented below. As one can see we have crossed into major statistically deviant territory, likely approaching a level that is 6 standard deviation away from the recent norms.

What do these charts tell us? In essence, that there is a high likelihood of substantial market dislocations based on previous comparable situations. More on this in a second.

Why quant funds? Or rather, what is so special about quant funds? The proper way to approach the question is to think of the market as an ecosystem of liquidity providers, who, based on the frequency of their trades, generate a cushioning to the open market trading mechanism. It is a fact that the vast majority of transactions in the market are not customer driven buy/sell orders, but are in fact high frequency, small block trades that constantly cross between a select few of these same quant funds and program traders.

This is a market in which the big players are Renaissance Technologies Medallion, Goldman Sachs and GETCO. Whereas the first two are household names, the last is an entity known primarily to quant market participants. Curiously, the Philosophy section in GETCO’s website exactly captures the critical role that quant funds play in an “efficient” market.

GETCO’s strategy is to align our business plan with what is best for the marketplace. We earn our revenues by providing enhanced liquidity and efficiency to electronic financial markets, which in turn results in lower costs for market participants (e.g. mutual funds, pension funds, and individual investors).

In addition to actively trading, we partner with many exchanges and their regulators to increase transparency throughout the industry and to create more efficient means for the transference of financial risk.

A good example to visualize the dynamic of this liquidity “ecosystem” is presented below. 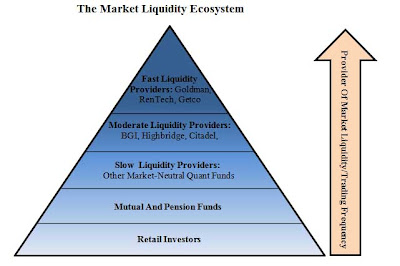 In order to maintain market efficiency, the ecosystem has to be balanced: liquidity disruptions at any one level could and will lead to unexpected market aberrations, such as exorbitant bid/ask margins, inability to unwind large block positions, and last but not least, explosive volatility: in essence a recreation of the market conditions approximating the days of August 2007, the days post the Lehman collapse, the first November market low, the irrational exuberance of the post New Year rally, and the 666 market lows.

The above tracking charts indicate that something is very off with the “slow”, “moderate” and “fast” liquidity providers, indicating that liquidity deleveraging is approaching (if not already is at) critical levels, as the vast majority of quants are either sitting on the sidelines, or are merely playing hot potato with each other (more on this also in a second). What this means is that marginal market participants, such as mutual and pension funds, and retail investors who are really just beneficiaries of the liquidity efficiency provided them by the higher-ups in the liquidity chain, are about to get a very rude awakening.

Also, it needs to be pointed out that the very top tier of the ecosystem is shrouded in secrecy: conclusions about its state can only be implied based on observable metrics from the HSKAX and HFRXEMN. It is safe to say that any conclusion drawn based upon observing these two indices are likely not too far off the mark.

Skeptics at this point will claim that it is impossible that quant and program trading has such as vast share of trading. The facts, however, indicate that not only is program trading a material component of daily volumes, it is in fact growing at an alarming pace. The following most recent weekly data from the New York Stock Exchange puts things into perspective: 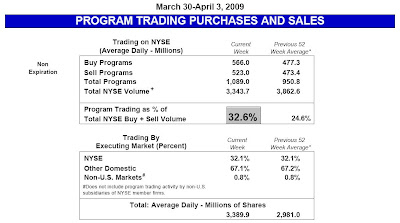 According to the NYSE, last week program trading was 8% higher than the 52 week average, which on almost 4 billion shares is a material increase. It is probably safe to say that the 1 billion in program trades last week does not account for significant additional low- to high-frequency trades originated at non NYSE members, implying the real number for the overall market is likely even higher.

A very interesting data point, also provided by the NYSE, implicates none other than administration darling Goldman Sachs in yet another potentially troubling development. The chart below demonstrates the program trading broken down by the top 15 most active NYSE member firms. I bring your attention to the total, principal, customer facilitation and agency columns. 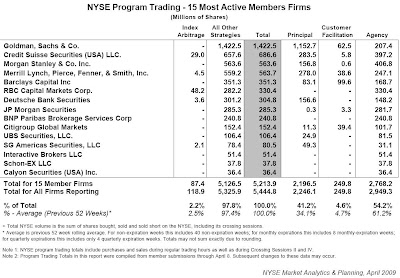 Key to note here is that Goldman’s program trading principal to agency+customer facilitation ratio is a staggering 5x, which is multiples higher than both the second most active program trader and the average ratio of the NYSE, both at or below 1x. The implication is that Goldman Sachs, due to its preeminent position not only as one of the world’s largest broker/dealers (pardon, Bank Holding Companies), but also as being on the top of the high-frequency trading/liquidity provision “food chain”, trades much more often for its own (principal) benefit, likely in tandem with the other top dogs on the list: RenTec, Highbridge (JP Morgan), and GETCO. In this light, the program trading spike over the past week could be perceived as much more sinister. For conspiracy lovers, long searching for any circumstantial evidence to catch the mysterious “plunge protection team” in action, you should look no further than this.

Following on the circumstantial evidence track, as Zero Hedge pointed out previously, over the past month, the Volume Weighted Average Price of the SPY index indicates that the bulk of the upswing has been done through low volume buying on the margin and from overnight gaps in afterhours market trading. The VWAP of the SPY through yesterday indicated that the real price of the S&P 500 would be roughly 60 points lower, or about 782, if the low volume marginal transactions had been netted out. And yet the market keeps on rising. This is an additional data point demonstrating that the equity market has reached a point where the transactions on the margin are all that matter as the core volume/liquidity providers slowly disappear one by one through ongoing deleveraging.

Unfortunately for them, this is not a sustainable condition.

As more and more quants focus on trading exclusively with themselves, and the slow and vanilla money piggy backs to low-vol market swings, the aberrations become self-fulfilling. What retail investors fail to acknowledge is that the quants close out a majority of their intraday positions at the end of each trading day, meaning that the vanilla money is stuck as a hot potato bagholder to what can only be classified as an unprecedented ponzi scheme. As the overall market volume is substantially lower now than it has been in the recent past, this strategy has in fact been working and will likely continue to do so… until it fails and we witness a repeat of the August 2007 quant failure events… at which point the market, just like Madoff, will become the emperor revealing its utter lack of clothing.

So what happens in a world where the very core of the capital markets system is gradually deleveraging to a point where maintaining a liquid and orderly market becomes impossible: large swings on low volume, massive bid-offer spreads, huge trading costs, inability to clear and numerous failed trades. When the quant deleveraging finally catches up with the market, the consequences will likely be unprecedented, with dramatic dislocations leading the market both higher and lower on record volatility. Furthermore, high convexity names such as double and triple negative ETFs, which are massively disbalanced with regard to underlying values after recent trading patterns, will see shifts which will make the November SRS jump to $250 seem like child’s play.

When will all this occur? The quant trader I spoke to would not commit himself to any specific time frame but noted that a date as early as next Monday could be a veritable D-day. His advice on a list of possible harbingers: continued deleveraging in quant funds as per the charts noted above, significant pre-market volatility swings as quants rebalance their end of day positions, increasing principal program trading by Goldman Sachs on decreasing relative overall trading volumes, ongoing index VWAP dislocations. One thing is for certain: the longer the divergence between real volume trading/liquidity and absolute market changes persists, the more memorable the ensuing market liquidity event will be. At the end of the day, despite the pronouncements by the administration and more and more sell-side analysts that the market is merely chasing the rebound in fundamentals in what has all of a sudden become a V-shaped recovery, the “rally” could simply be explained by technical factor driven capital-liquidity aberrations, which will continue at most for mere weeks if not days.

17 Responses to "The Incredibly Shrinking Market Liquidity, Or The Upcoming Black Swan Of Black Swans"