The Deteriorating Housing Backdrop, And Why The Wells Rally Won’t Last

When thinking about banks, start with housing. The Homeowner Affordability and Stability Plan may slow foreclosures, and homebuyer Federal tax credits are stabilizing sales. But what matters more are home prices and defaults on existing loans:

* For securitized mortgages, delinquencies continue to climb, and recovery values are tumbling (first charts). $750 bn in Option ARMs are deteriorating rapidly, as negative amortization must be paid down at reset (60% are in California, 10% in Florida).

* National Notices of Default are at a new peak, and a cycle-high 74% of such Notices are moving to auction (third chart), despite foreclosure prevention programs. In some cases, vacant homes are benefiting from the foreclosure moratorium; that does not seem logical, or sustainable.

* Bank-held mortgages generally perform better than securitized mortgages, which are 15% of the total, and 51% of all delinquencies. However, banks carry their mortgages at ~90 cents on the dollar, so there’s little room for underestimating losses.

* Globally, financial institutions have lost ~$1 trillion of capital and raised ~$1 trillion. Whether it’s the IMF or the ubiquitous Nouriel Roubini, remaining writedowns are expected to be as large as losses already taken. As discussed last week, some banks will be able to earn their way out, but if their capital ratios are too low, it will be quite a tightrope. 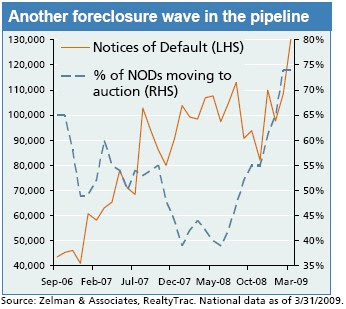 With that backdrop and ISI Group’s provisioning estimates, WFC provisions and charge-offs appear 30%-40% below expectations. WFC has the largest commercial real estate portfolio ($142 bn), the largest Option ARM portfolio ($93 bn, net of writedowns), $129 bn in second liens and $15 bn of exposure to off-balance sheet CDOs. So one would expect its provisioning and capitalization policies to be conservative. But when looking at loan loss reserves and a common measure of capital adequacy (next chart), WFC ranks in line or lower than other banks. On the chart, it looks like their ball hit a divot of some kind. Other bank provisions and earnings may stand up better to scrutiny. But the “World Cup” Stress Test announcement might not pass muster with markets if everyone ends up in Group A (*). The U.S economy is already worse than the Stress Test “Base Case”, turning the test into something of a take-home exam. We expect more stress on US banks later in 2009, with Q1 perhaps being the high water mark for bank earnings this year. 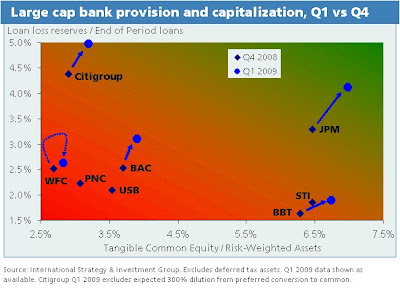 (*) Newspaper reports indicate that the Treasury is considering a World Cup format for categorizing banks: Group A is fine and will be allowed to repay TARP. Group B is considered to have no major problem but “their ability to raise capital should be watched carefully” (i.e., no TARP repayment). Group C is short of capital and may need government capital. Group D is considered incapable of operating on their own (and usually includes, at least in the soccer context, such countries as Switzerland, Trinidad & Tobago, Korea, when not hosting, and Romania… PS to our European readers who lack the sense of sarcasm, Zero Hedge (full disclosure) is a big fan of Hagi and Popescu).