Jumping The Shark In HY On Record Low Recoveries

Among the more important facts skipped by the general public in its fascination with the equity bear market rally, is that the perspective for leveraged corporate issuers is getting worse and worse, never more so than just this March, when the monthly annualized default rate surged to a 20 year record high of 19.4%, on par with rating agency expectations for 2009 actual default rates. This has been coupled with unprecedented low unsecured recovery rates of 9%. Yet these two facts have not prevented the high yield cash market to post NASDAQ like YTD returns. In this sense, the HY market is merely another example of an asset class becoming completely unhinged from its news flow and fundamentals: that in itself is not surprising – most assets lately are trading on deferred hope and good intentions than actual facts. 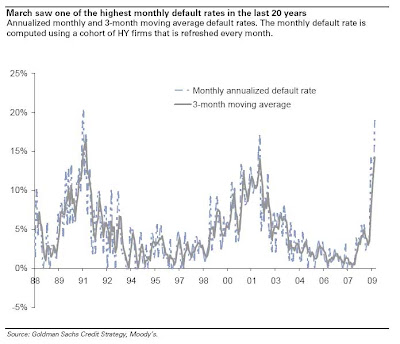 And as in the equity market, people are left scratching their heads why this disconnect. One point of view provided by Goldman Sachs’ credit team seems plausible enough:

We think the explanation is partly fundamental, and partly technical. First, as we argued last week, tentative signs of stabilization in macro data suggest that the recession is near a bottom. As the tail risk of an even deeper recession recedes – and we agree that is has – credit spreads should rally, especially HY. But we also suspect a strong technical component because money flows are high and liquidity is low. Since Dec. 1, 2008, retail investors have allocated over $8 billion of net new money to HY mutual funds. And finally, we think these bullish forces have been magnified by the fact that most investors were underinvested in the market. This presumably damped selling pressure as bond investors felt compelled to cover their “short position” in cash.

Zero Hedge disagrees with Goldman on their assessment that the recession is bottoming, however the technical fund flow observation has credibility, although curious it is mostly at the expense of equity mutual funds (see most recent TrimTabs data). Furthermore, as Zero Hedge recently discussed, the fixed income investment community’s concern with participating in the sub-BBB+ rated primary market has manifested in a substantial increase in secondary market prevailing price levels. Even Goldman itself acknowledges:

As earlier pointed out, another unique feature of the current “D-process” is that recovery rates on unsecured defaults are less than half of what prior recessions have demonstrated. While in prior downcycles recovery rates have averaged about 20%, empirical data since December 1 shows an average unsecured rate of 9%. And the trends is only getting more acute: the last four CDS settlement auctions that have taken place over the past 2 weeks have averaged less than 6%, as seen by Chemtura’s 15%, Abitibi’s 3.25%, Chater’s 2.375% and Idearc’s 1.75 recoveries! Another troubling data point is that secured recovery rates, as demonstrated by LCDX auctions, demonstrate an almost statistically insignificant difference from unsecured recoveries at 15.4%. 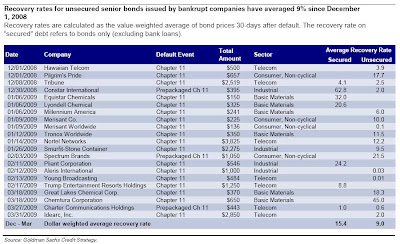 An interesting side-phenomenon is that bankruptcies are becoming the true Litmus test of the current economic fiasco. Once the “hope” element is removed from asset pricing, the real lack of clothing become imminently apparent. Nowhere is this more evident than in Lehman’s unsecured recovery rate, as Zero Hedge has discussed previously. With Lehman’s unsecured bonds clearing at a 8.625% recovery rate, one can only speculate what is the true worth of the other financial institutions if they were to be seen in the same perspective as Lehman. After all the 8.625% recovery rate (which, of course, implies there is over 91% of value deficiency to the equity tranche), if even haircut by a generous 50%, implies that banks who hold comparable assets to Lehman (most of them) are impaired beyond repair. The conclusion is that while Lehman is trading purely on run-off or liquidation value, there is some magical “hand” that is allowing the other banks to trade at exponential multiples of value compared to real, market tested run off asset value. If one does a back of the envelope analysis for Citi, BofA and Wells Fargo, and projects asset values based on Lehman unsecured obligations’ trading price, the equity value in each and every one of the abovementioned banks is staggeringly negative.

One last thing to point out, is that while pure cash HY bonds have benefited from the same old technical aberrations, the same can not be said of the synthetic market, best seen in the performance of the HY11 index. Unlike standalone credits, defaults have a direct impact in the pricing, and thus value, of this index. The chart below demonstrates that HY11 is down 8% for the year, and the bulk of this underperformance is due to default losses on 6 names! These have more than offset the positive carry and mark-to-giddy-market gains. It is only a matter of time before cash fundamentals on single names revert back to some form of rationality and retrace a substantial portion of the undeserved MTGM gains year to date. 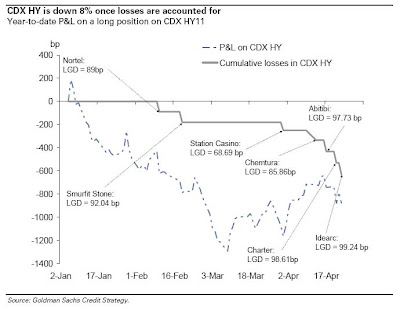 The 30,000 foot conclusion from this data is that the bifurcation continues: the divergence between prices of securities which still possess some measure of the “Hope” value premium and those that do not is becoming historic, and while Zero Hedge has discussed this divergence primarily in the context of the equity market, the bond market is experiencing this schism as well. As asset classes tend to correlate to each other, any outlier event in either of these markets is likely to force a violent correction, where the “Hope” value premium evaporates suddenly, and the traditional overshoot to the downside, as the “Despair” risk premium become the dominant force, will be unprecedented. Cash is still king, even as the Treasury tries it best to hypedevalue it through its daily operations.