Bail Out For Dummies – Part 1

Zero Hedge believes it is a civic duty to represent the total melange of assorted concepts and alphabet soups in the ongoing debacle that is the Bail Out in a comprehensible and easily understandable context as the decisions the administration is making will have generational consequences. Therefore, I am presenting a view of the players, the mechanisms and the core of the Bail Out problem in a way that will be much easier to be comprehended by most interested parties. The conclusion is frightening. 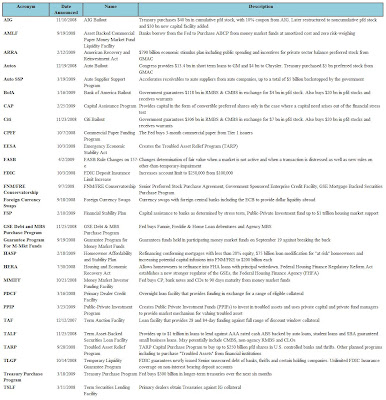 The Core Of The Problem

As the table below tries to capture, the core of the Bail Out problem is reconciling the balance sheet of the banking and thrift system. The biggest concern is the roughly $8.1 trillion in loans currently on the asset side of the equation, however the other assets, which include $2.8 trillion in securities and $2.5 trillion in other assets should not be ignored. I point out the loans as this is where the vast majority of the “toxic assets” reside. The real question mark is what is the true value of this $8.1 trillion number as the financial system contracts massively. As has been pointed out, banks have taken only about $1.2 trillion in write downs against these assets.

Is that amount of write downs enough?

Not by a long shot if one considers the various guarantee and support programs enacted by the Federal Reserve and the Treasury. In a normal world, the Assets, by definition, should equal the Liabilities plus Shareholder Equity. As nobody knows what the true value of the assets really is, the Bail Out support programs are designed to provide the backing to make it seem like the almost $8 trillion in deposits, the core of bank and thrift liabilities, are not “supported” by toxic assets, or “hot air” to use popular jargon. As presented, the various Bail Out programs now support over 72% of the total liabilities on the balance sheet. The implications of this are staggering: Roubini anticipates the total amount of write downs (in the US) will reach $3.6 trillion, or another $2.4 trillion to go. The revised IMF estimate (which is not the final one by a long shot) estimates $3.1 trillion in total US losses, or another roughly $2 trillion to go. These provisions are optimistic. Why – because through its various implicit and explicit guarantees the administration is saying the total pain could potentially reach $8.8 trillion. The Fed and Treasury are also providing support for up to 20% of the bank system shareholder equity through TARP preferred stock. As the government has the best information about the true sad state of affairs, it is likely that as more and more information about the weakness of the financial system comes to light, more of these support guarantees will become utilized to their full extent. This also means that the asset side of the balance sheet is potentially “inflated” by almost 75% and the net result could be the most dramatic collapse in a banking system’s assets in record history as over $8 trillion in “assets” are reevaluated. 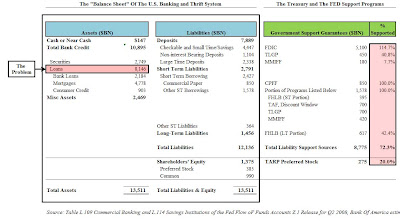 The logical follow up is what securities are eligible for all these various support programs. As the table below demonstrates, an increasing amount (in number and absolute dollars) of “liquidity” facilities by the Fed are allowing essentially any asset to be eligible for collateralization. Whereas traditional Fed liquidity conduits had been limited to just the least risky of assets, (AAA rated ABS and CP, and Treasuries) it is becoming the norm that virtually any security, regardless of risk will be “eligible” collateral for Fed backstopped guarantees. The recent transformation in the TALF (with the PPIP) support is just such an indication. Ultimately, as additional Bail Out programs appear, it is likely that they will have no practical collateral threshold whatsoever, as more and more assets of all types are perceived to be dramatically impaired and which need systemic support. 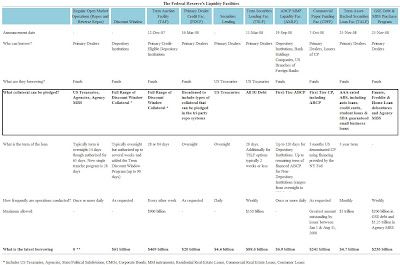 As Zero Hedge pointed out over the past week, the U.S. deficit is increasing at a dramatic and unprecedented pace. The bulk of expenditures are currently going merely to fund the Bail Out program, in essence transferring U.S. sovereign issuance to the Fed’s balance sheet which uses the newly minted cash to fund all the incremental and growing support programs. Currently only a small percentage of the guarantees are funded, and as we head to the full funding capacity on all the Bail Out programs ($8.8 trillion), Zero Hedge expects to see as much (not necessarily the full amount) as $7 trillion more of new Treasury issuance as the true “worth” of the assets is realized. All the debate over Agency, CRE, whole loan, etc. write downs are really just a drop in the bucket based on none other than the government’s own estimate of just how bad things could really get eventually. In this context the Mark To Market debate is also moot, as is private participation in the PPIP, and the Stress Test: the scale of the problem is simply insurmountable using current mechanisms in place.

As more data emerges, Zero Hedge believe the real risk to the Bailout program is in fact the liability side of the balance sheet. The bottom line is that every dollar printed by the Treasury directly goes to fund (and dilute) a dollar in deposits, bypassing M1-M3. If the $8 trillion pool in total deposits realizes that it is supported by assets which even the government is saying are worth fractions on the dollar, the risk of a wholesale systemic bank run becomes unstoppable even with all the government backstops in place, as the latter will be contingent on continued willing recipients of those rapidly devaluing pieces of paper known as U.S. Treasuries and once that assumption is questioned or outright proven false, all bets are off.

big hat tip to Bank Of America for primary data.