Is the Recession Driven by “A Reduced Willingness to Work”?

Share on Facebook Follow on Facebook Add to Google+ Connect on Linked in Subscribe by Email Print This Post
`
David Beckworth responds to the claim that this recession is due to “a reduced willingness to work,” and that “Labor demand shifts explain no more than 10 percent of what has happened in this recession”:

What Happened to the 1,911,000 Lost Jobs?, by David Beckworth: Mark Thoma directs us to a stunning claim made by Casey Mulligan in the New York Times:

[T]he decreased employment is explained more by reductions in the supply of labor (the willingness of people to work) and less by the demand for labor (the number of workers that employers need to hire).

If true, this claim means most of the 1,911,000 jobs lost since December 2007 are the result of voluntary choices made by employees. This interpretation probably strikes most observers as ridiculous, but before we dismiss it out of hand let’s take a look at the employment data. The place for data on this question is the BLS’s Job Opportunity and Labor Turnover Survey (JOLTS). This survey provides data on job openings, hires, and separations, and goes back to December 2000.

Let’s first take a look at the JOLTS data on “quits” and “layoffs & discharges”. The quits category is defined as “employees who left voluntarily” and does not include retirees or transfers to other locations. The layoffs and discharges category is self explanatory, but here is the JOLTS definition if you are interested. I have graphed these two series below through the last data point available, October 2008 (click on figure to enlarge):
` 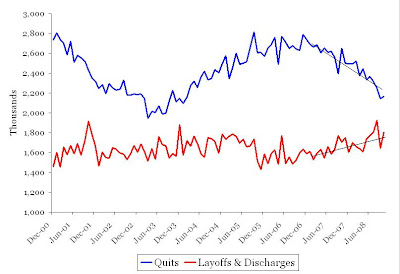 `
Note that the number of voluntary quits has actually declined over the past two years, indicating workers are not leaving their jobs en masse as suggested by Mulligan. So much for the labor supply contraction. Layoffs & discharges, on the other hand, show a upward trend over the past two years. The increase in layoffs & discharges, however, is quite modest and that may be surprising to some observers given the large number of lost jobs this year. The modest increase in layoffs & discharges, though, is more than made up for with the lack of new job openings and hires (definitions here) as can be seen in the figure below (click on figure to enlarge):
` 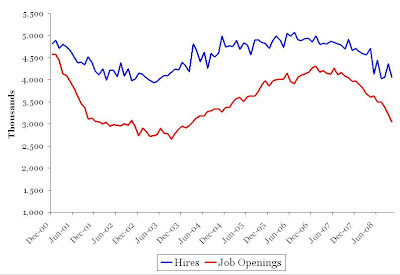 `
This last graph highlights an interesting point raised by Robert Hall: employment typically falls during a recession not because of a huge increase in job losses, but because new jobs are harder to find. Either way, weakened labor demand is the source of the employment reduction. The JOLTS data show this to be the case for the current U.S. recession.

`
Here are more papers on the topic of what causes employment to vary over business cycles, including the Hall paper discussed above. There is some debate over whether it is the hire rate or the separation rate that is responsible for variations in employment over the business cycle – it depends in part on how the cycle and trend in employment are defined and extracted econometrically – but you won’t find any evidence for or advocates of the view that it is reductions in labor supply, i.e. voluntary separations by employees, that are driving these movements:
Originally published at the Economist’s View reproduced here with the author’s permission.

Is the Recession Driven by “A Reduced Willingness to Work”? added by Mark Thoma on December 30, 2008
View all posts by Mark Thoma →

4 Responses to "Is the Recession Driven by “A Reduced Willingness to Work”?"